The making of a sustainable bio-based economy The bio-based economy is currently driven by public policy (especially EU legislation) and private investment. Finland is a forerunner in next-generation renewable fuels and forest-based bioenergy concepts. The Imatra-Lappeenranta Region in southeastern Finland is a central location for the European forestry industry, with several major production sites within a small geographical area. Due to the region’s history and culture of bio-based industry, there is also a concentration of small- and medium-sized enterprises that are experienced in process industry related technology and services. The synergy between existing industries and future possibilities is tangible. Since the first accumulation of hunter-gatherers into villages many thousand years ago, urbanisation has been ongoing and regular. About half of the world’s population now live in urban areas, and it is predicted that by 2050 some 65% and 85% of the developing and developed world respectively, will be urbanised. Expanding cities bring their own problems, however, the movement is well under way to find smart solutions. Smart cities are a new style of city providing sustainable growth and designed to encourage healthy economic activities that reduce the burden on the environment while improving the quality of life. 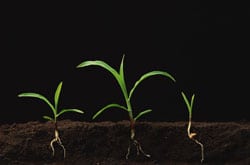 We talk to Nilsy Desaint from EuropaBio about Biotechnology and the role it plays in a modern world.

Biotechnology has a huge potential in alleviating environmental, human health and economic challenges.

Insights about biotechnology in Colombia: the successful case of CorpoGen in Bogota DC, Colombia. In 2011, the Colombian Government approved a policy aimed at promoting biotechnology and the sustainable use of biological resources (CONPES 3697), as part of the current National Development Plan (Plan Nacional de Desarrollo 2010-2014). The aim is to establish the conditions necessary to attract private and public investment in biotechnological endeavours. These include legislation that will allow access to genetic and biological resources, commercialization of products and the establishment of venture capital funds for investment.

Madrid – go for your conference, stay for its architecture

Written by The MCB For those looking to plan a business conference in a lively, thriving city marked by eclectic historic and contemporary architecture, Madrid could be just the ticket. In recent decades, Madrid has undergone a huge expansion of its overall infrastructure for convention and conference facilities and special-event venues. A congenial blend of an old European city and modern facilities, Madrid has culture, style and energy. Its transportation infrastructure has played an important role in helping the city attract congresses and incentive programs: a fourth terminal has been added at Madrid Barajas Airport, the subway has been enlarged and new four and five-star hotels have been added to the urban fabric. The International Congress & Convention Association has identified Madrid as the third most popular city in the world for congresses, and the Union of International Associations has identified it as the seventh city in the world for convention tourism.